What do I do with all these wires? I need to route MIDI from the computer to a synth module and route the audio it produces back into the computer. My first take was to draw a schematic. It turned out that an accurate physical depiction was still pretty confusing. Then I drew a logical depiction and it became a lot clearer.

There was a time when I drew all of my diagrams with my coding stick. Not too pretty. Now I have software tools to get me past my sloppiness. The diagram below, drawn using Gliffy, represents the physical connections of the Focusrite Scarlett 18i8 computer audio interface. 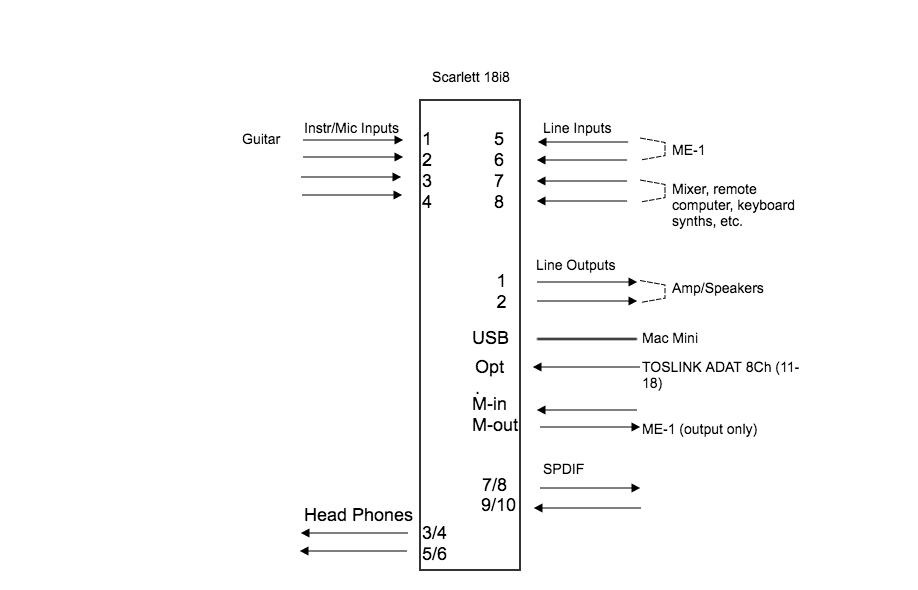 The second diagram, below, is a logical view of the connections of the Focusrite Scarlett 18i8 audio interface.

This logical point of view is a re-imagining of the device connections as if all of the inputs came into the left side and all of the outputs exit in the right side. Inputs and outputs are numbered 1 through n, the same as they are numbered on the physical device and as described in the product documentation. They are referred to as channels. Doing this helps me think about how I need to wire things.

What happens here is that all of the input signals are routed across the USB interface into the computer. A DAW application connects to the interface via the operating system’s driver API and can read the content of each input channel as a stream of digitally encoded audio. The Scarlett performs the work of converting the analog audio signals into an encoded digital stream. MIDI signals are already digital so they are passed on as is. During recording, the application reads these signal streams and stores them as audio or MIDI files. Generally speaking inputs are associated with tracks and track are associated with files. Recording is the process of creating files from sound. Playback is the reverse of this where the DAW writes digital streams and the Scarlett converts them to analog.

A live play application like MainStage reads the input channels, applies audio processing such as reverb, and then outputs the signals to the output channels connected to the speakers.

A MIDI application can spiral through the inputs and outputs to turn keypress information into sounds. One example of this is how I use the Kurzweil ME-1 synthesizer module in my setup. When I press a key on my controller keyboard it sends a Note-On message to the Scarlett MIDI-In which is passed to the MIDI-Out. This is connected to the ME-1 MIDI-In. The ME-1 produces a stereo note sound that is put on the ME-1 analog audio outputs. I could connect the audio directly to speakers but then I would not be able to record it. Instead, the audio signal is connected to two Scarlett line inputs which makes it accessible to the DAW. The Scarlett is connected to the speakers so I can hear everything. 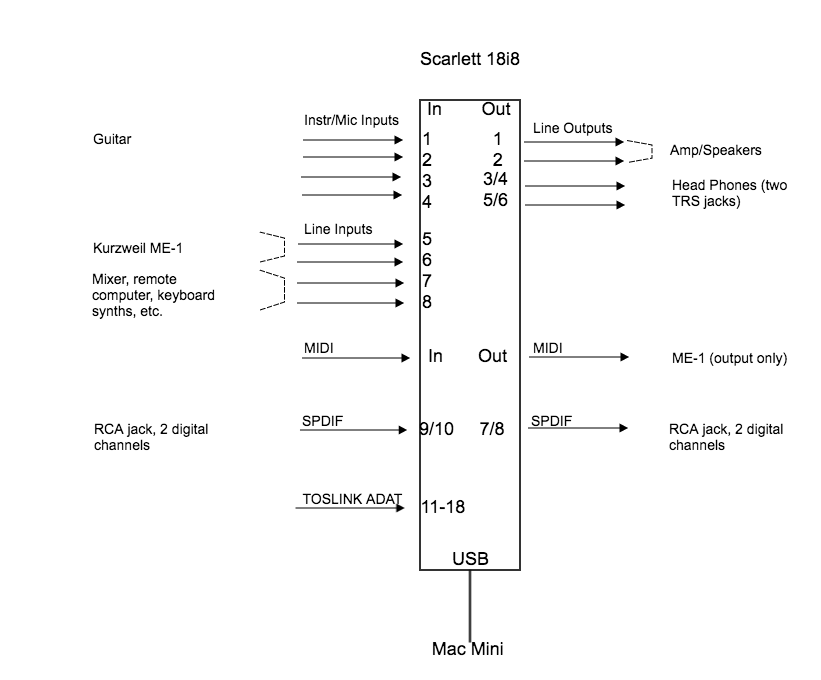 Why is this Scarlett model called the 18i8? When I look at the device, I see only ten input connectors plus a TOSLINK. There are indeed 18 inputs and 8 output channels. Some are analog and some are digital. I have yet to use the TOSLINK inputs but have used all of the others. Each numbered interface is independently controllable in software. The mixer software provided by Focusrite allows pairs of interfaces to be joined or not. So the headphone jacks, for instance, could be treated as 4 separate outputs. Your wiring may vary.